It has been revealed that Manchester United will focus their attention on Stefan de Vrij if they are unsuccessful with their chase of Sergio Ramos. 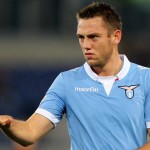 The Red Devils continue to be heavily linked with Real Madrid star Ramos, who is reportedly unhappy that the Spanish giants have not yet offered him an improved contract.

There are conflicting reports regarding the situation with many suggesting Ramos will not be leaving the Santiago Bernabeu anytime soon which has prompted a report from Dutch newspaper De Telegraaf.

They suggest that United boss Louis van Gaal will target Holland international de Vrij if he fails in a bid for Ramos.

The 23-year old Lazio defender joined Lazio from Feyenoord last summer and impressed in his debut Serie A campaign.