Reports are out claiming that Manchester United are interested in MK Dons midfielder Dele Alli. 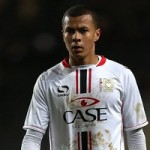 Alli, who has been likened to Steven Gerrard, has been a long-term target for Liverpool.

The People reported that United are trying to hijack Liverpool’s bid to sign the teen.

The 18 year-old is an England U18 international and was born and raised in Milton Keynes. Daley Blind Backs Himself In For Man Utd Centre-Half Role