Reports are out claiming that Manchester United are keen on AC Milan defender Adil Rami. 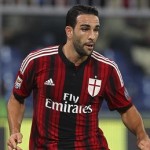 The Daily Star reported that United will sell Javier Hernandez to AC Milan if they can get Rami in return.

The Mexican international striker is expected to return to Old Trafford at the end of the current season after being on loan at Real Madrid, but chances to return to the line-up are unlikely.

And Milan are still reported to be searching for a new striker despite securing Fernando Torres on a permanent deal.

Rami is a centre-back who has featured 11 times this season for the Serie A side and United are said to be looking for defensive reinforcements.