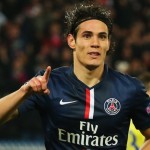 Reports are out claiming that Manchester United could use Angel di Maria’s unhappiness to win the race for PSG striker Edinson Cavani.

The Mail on Sunday says Di Maria is determined to get a move OUT of United this summer.

And there could be a complex equation which would see PSG striker Cavani move to Old Trafford.

Straight-forward exchange-plus-cash deals are now rare because of the myriad of agents involved.

But the movement of Di Maria to PSG and Cavani to United is possible.