It has been reported that Manchester United have employed a psychologist to assist Luke Shaw as he comes to terms with his shocking double leg break. 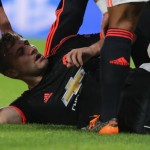 Shaw underwent an operation on the evening of the match, which saw two orthopaedic surgeons and a trauma specialist attempt to mend the two broken bones in the 20-year-old’s right leg.

The Daily Star reports a United club source has indicated Shaw would be provided with a psychologist to help him deal with the mental aspects of the rehabilitation process.

“Part of the recovery process will involve the player dealing with his mental demons and the bad memories of what happened to him that night,” the United club source said.

“A psychologist will be made available to him if needed, to talk him through it all and help his chances of being mentally ready to return to the game.”