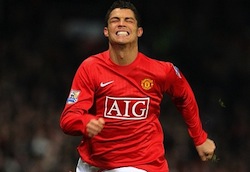 This is an explosive news for Real Madrid and Man Utd fans as Sir Alex Ferguson has confirmed that Man Utd will re-sign Cristiano Ronaldo
in the summer for £50m!.

The Portugese striker has said that life in Spain is not all sunshine and reportedly there has been a locker room bust-up with Real Madrid coach Jose Mourinho, “I do not feel good here” , said Ronaldo.

“There is not much mirrors in the locker room, how am i going to perform if can’t view every angle of my hair and face before a match?, this is ridiculous!, at least in Manchester there were mirrors all over the place” , continued the Portugese peacock.

While Real Madrid has refused to make any comments, Man Utd have released a statement on their site saying “We can confirm that we are in talks to bring Ronaldo back to England, the deal is not yet done but we are close”.