Interesting transfer news are out claiming that Manchester United are reviving their interest in Benfica winger Nicolas Gaitan. 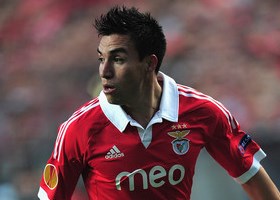 It is said that the Premier League champions have been following the Argentina international for the past two years, though are yet to make a formal move for the dynamic midfielder.

Record claims that United scouts have been spotted at no less than six Liga games featuring Benfica this season.

United boss David Moyes’ scouts have delivered glowing reports on Gaitan, who has rediscovered his best form in recent months.