Reports are out claiming that Manchester United have made a move for Atletico Madrid winger Antoine Griezmann. 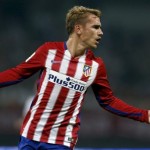 AS reported that contact has already been made with Griezmann’s agent, with United wanting to register their interest.

United boss Louis van Gaal wants to be kept up-to-speed on the Frenchman’s situation, knowing he is also interesting Arsenal, Barcelona and Chelsea.

Van Gaal sees Griezmann as an ideal addition to his attacking options.

Just this weekend, LVG admitted: “I have said we need creative, speedy players in attack.

“And you have seen which players I have bought. It is like that profile, but we need more.”