Reports are out claiming that Manchester United are lining up a bid for PSG striker Ezequiel Lavezzi. 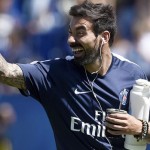 Gazzetta dello Sport reported that United have made contact with Lavezzi’s minders in recent days to register their interest.

PSG coach Laurent Blanc doesn’t regard the Argentine international as part of his plans and is happy for the club to sell.

Along with United, Arsenal and Valencia are also linked with Lavezzi, whose agent, Alejandro Mazzoni, concedes a return to Italy is unlikely for the former Napoli star.