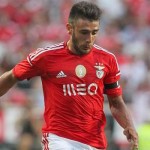 It has been reported that Manchester United are challenging Liverpool for Benfica midfielder Eduardo Salvio.

Record says United are hopeful of pulling off a deal for Salvio despite the player being in talks with Liverpool.

Salvio has undergone scans showing he needs surgery on a knee ligament injury that could keep him sidelined for up to two months.

That means that Liverpool are unlikely to push ahead with a deal until they know the full severity of the problem and make sure the player is back to full fitness.

And that leaves the door open for United to get back into the race, although Paris Saint-Germain could also look to hijack Liverpool’s move.