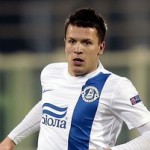 The Daily Mail reported that United scouts are watching Konoplyanka.

The long-time Liverpool target is available for £12.1million this summer and United have joined the throngs watching him lately with Paris Saint-Germain, Tottenham, Arsenal and German club Schalke all represented.

Liverpool came close to doing a deal of nearly £20m in January while Tottenham have maintained dialogue with Dnipro ahead of appointing a new manager.