Reports are out claiming that Manchester United have joined the battle for Everton defender John Stones. 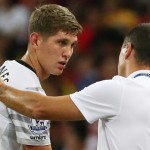 The Sunday Mirror reported that United have joined the race for Stones after discreet contact with Everton.

And Louis van Gaal could have a better chance of landing the highly-rated 21-year-old defender than Stamford Bridge boss Jose Mourinho.

Everton manager Roberto Martinez is said to be furious at the public way Chelsea made their move for England centre-back Stones while the Toffees were in Singapore for the Barclay’s Asia Trophy.

And it’s believed Everton are in no hurry to do business with Chelsea after their open pursuit of Stones.

United have asked to be kept informed of the situation if Everton are willing to sell Stones.