Reports are out claiming that Manchester United boss Louis van Gaal is ready to sell Nani. 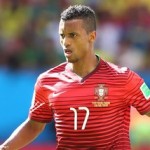 The Daily Star reported that United will enter further discussions with Juventus over Arturo Vidal, 27, but the Serie A giants want around £40m for the Chile midfielder.

The Portuguese international winger could be used as a makeweight and it is understood he is one of the players that Van Gaal will inform this week is surplus to requirements at the club.

The former Sporting Lisbon star has never fulfilled his potential at Old Trafford and will be offloaded to make way for Di Maria.