Reports are out claiming that Manchester United and Tottenham are in contact with Galatasaray for Wesley Sneijder. 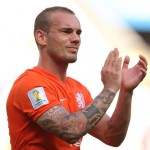 Fanatik reported that Sneijder’s Gala deal carries a buyout clause and his sparkling form for Holland at the World Cup has reignited the interest of major clubs.

United, Spurs and Atletico Madrid have all registered their interest with Gala for Sneijder, along with former club Ajax.

Only last week, Sneijder confessed he’d find it difficult to turn down the chance to follow Holland coach Louis van Gaal to United.

“I’m happy at Galatasaray, I have established myself at the club.

“But if Van Gaal would make a bid for me I would at least be forced to consider it. No one from the Netherlands can easily ignore Van Gaal.”