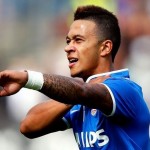 Reports are out claiming that Memphis Depay has penned new terms with PSV Eindhoven.

The Dutch international has ended talk of a summer move by signing a contract extension to 2018 with PSV Eindhoven.

The 20-year-old had been linked with both Manchester United and Tottenham after starring for Holland at the World Cup.

But Depay has decided to stay with PSV, committing to a new long-term contract.