It has been revealed that Manchester United are tracking Leeds United midfielder Lewis Cook. 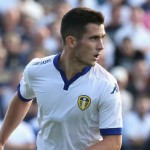 The Sun claims that Old Trafford scouts have been keeping tabs on his performances ahead of a possible move.

The midfielder committed his future to the Championship club in May.

“I’m enjoying my football and enjoying being here. I’ve got no regrets,” Cook said. “There was a bit of speculation around it all, but as soon as I was told I was going to be signed, I did it.”