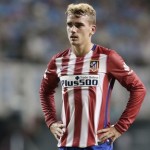 It has been reported that Manchester United are being linked with a late market move for Atletico Madrid winger Antoine Griezmann.

The Daily Mail claims that after Pedro’s stunning decision to join Chelsea over United yesterday, Louis van Gaal is desperately looking for an alternative to play on the wing.

Griezmann could be the man Van Gaal turns to next as he seeks a replacement for Angel di Maria.

The French international can play anywhere across the front three and brings great versatility to any attack.

He has a monster £56m buyout clause in his contract but could be available for less.