It has been revealed that Manchester United are eyeing Bayern Munich defender Jerome Boateng. 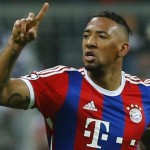 Boateng, who can play at right-back and centre-half, is rated highly by Van Gaal, who appreciates the German’s versatility.

The Bayern defender has previous experience in the Premier League with United’s local rivals, Manchester City.

Bayern will be reluctant to lose Boateng given he is a key part of coach Pep Guardiola’s first team plans.