Reports are out claiming that Bayern Munich midfielder Bastian Schweinsteiger is on Manchester United’s radar. 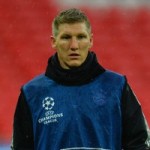 The Sunday Mirror claims that the Premier League champions will set their sights on Schweinsteiger – if a third bid for Barcelona’s Cesc Fabregas fails this week.

It is said that United have become aware of whispers in Germany that the German international may not fit into Pep Guardiola’s new Bavarian blueprint.

And with United ­looking for top-class midfield alternatives should a final ­attempt to prise Fabregas away from the Nou Camp be unsuccessful, the 29-year-old German would fit the bill perfectly.