Interesting transfer news are out claiming that Manchester United have joined the battle for FC Basel defender Fabian Schar. 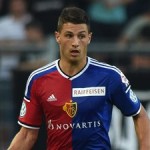 The People reported that United boss Louis van Gaal has his eye on Schar as he urgently seeks defensive cover.

He was watched by United last week after Van Gaal identified the ­recruitment of a strong centre-half as his No.1 priority when the window opens.

Although Mats Hummels and Ron Vlaar are both on his radar, he has also been linked with Porto’s Bruno Martins Indi.