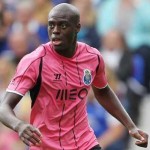 Former Holland coach Van Gaal took Martins Indi with him to the World Cup last summer and rates him highly.

The young centre-half only left Feyenoord for Porto after the Brazil tournament, but is expected to quickly move on.

Southampton boss Ronald Koeman, who worked with Martins Indi at Feyenoord, is also keen on the centre-half – pitting him against his great coaching rival.

Van Gaal, meanwhile, had United scouts posted at Porto’s win at Penafiel on the weekend to check on the defender.