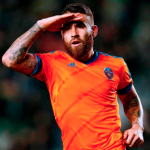 After a raft of big money deals in the last 72 hours, United are now focusing on finding a new, senior centre-half, with Otamendi a priority.

Super Deporte says United chief Ed Woodward has called in Mendes to assist with negotiations over a deal for the Argentina defender.

Valencia are demanding €50 million for the centre-half and Woodward is hoping to talk down that valuation with the assistance of Mendes.

Otamendi is viewed at United as an alternative to Real Madrid defender Sergio Ramos.