It has been reported that Manchester United have told PSG to get serious about Angel di Maria. 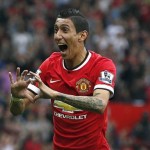 United are happy to allow Di Maria to leave, given his unhappiness and problems suffered in Manchester during his debut season in the Barclays Premier League.

The Daily Mail says it is understood PSG only offered an initial 40 million euros (£28.5m) for Di Maria ? a price which would represent a heavy loss for United, given they paid £59.7m a year before.

Nasser Al Khelaifi, PSG’s owner, and sports director Olivier Letang are understood to be in London for discussions over the fee with United’s executive vice-chairman Ed Woodward.