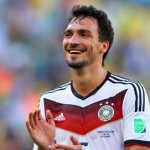 McGrath wrote in the Sunday World: “I’m happy to hear that Mats Hummels is one of the players on van Gaal’s shopping list.

“He really impressed me for Germany during the World Cup with a good spring for a high ball and an uncompromising attitude to defending.

“And he’s only 25, so Hummels at centre-half as a replacement for Nemanja Vidic would be a long-term buy for the club.”