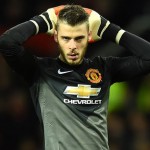 He told talkSPORT: “A lot of fans wouldn’t like to see him go.

“Especially because of the season he’s having.

“He took his time to settle in but this year he’s matured into a top goalkeeper who can handle the Premier League. These things happen in football though and, if there’s an interest, then clubs will test the market. The most important thing for Man United to do is reassure him that he is the No.1 at the club.

“They can give him a new and improved deal, because he’s earned that.

“That’s what the players want, when they work hard for it.”