It has been reported that ADO Den Haag coach Henk Fraser has declared that Memphis Depay should be allowed to make his own mistakes at Manchester United. 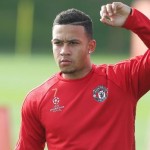 “He takes a lot of risks, which do not always come off.

“But such a player, like Memphis, can then create irritation and incomprehension among people. While I think just let him be.

“Let him learn and make mistakes, instead of forcing him to compromise his own game. He needs to get through this. He has so much natural talent.”

Hargreaves Defends Fellaini : Not Fair To Point Out One Individual!