Finally! The Barclay’s Premier League 2009/2010 season is upon us, and it begins with the Community Shield match between Manchester United and Chelsea.

It will be interesting to see how Man Utd cope without Ronaldo and Tevez and it’s also a good match to see how Chelsea is going to play with their new system under Carlo Ancelotti. 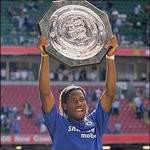 Out of all those signing it’s probable that we will only get to see Valencia, Owen, Zhirkov and Sturridge in the game.

United have some injury worries going into the match with Vidic and Van Der Sar out while Chelsea have no major concerns.