It has been revealed that Manchester United are being linked with PSG striker Ezequiel Lavezzi. 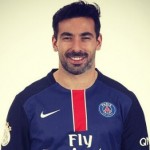 Lavezzi is ready to leave PSG this month after the arrival of Angel di Maria from United.

Super Deporte says Valencia are keen to bring Lavezzi to Spain for the new season.

However, they could face competition from United, where Lavezzi has been discussed as a replacement for Di Maria.

The Argentine international can play on the flank, but also as an out-and-out striker, where United have found themselves short with the season underway.