Reports are out claiming that Manchester United legend Paul Scholes is wanted back at the club. 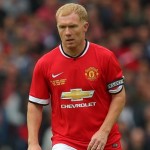 The People reported that United want Scholes back on the coaching staff – for this season’s UEFA Youth League.

Old Trafford legend Scholes is now a leading TV pundit on BT Sport and has been an outspoken critic of Louis van Gaal in his attempts to turn around United’s fortunes.

But although he’s not backed away from speaking his mind about the Van Gaal regime, it’s believed Ryan Giggs, assistant to the Dutchman, and senior Academy coach Nicky Butt want Scholes to return to help with the Under-19 side when they are playing games in the competition, which runs alongside the seniors’ Champions League games.