Reports are out claiming that Manchester United are attempting to talk down Juventus’ asking price for Arturo Vidal. 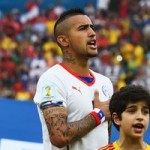 The Daily Mail reported that United remain keen on Vidal but the Turin-based club want £37m for their Chile star.

Louis van Gaal is believed to be keen to sign the Chilean, who represented his country at the World Cup in Brazil.

United have made tentative enquiries as to Vidal’s availability but they are currently miles away from Juve’s valuation.