It has been reported that former football scout and director Tor-Kristian Karlsen has questioned Manchester United’s pursuit of Lazio star Felipe Anderson. 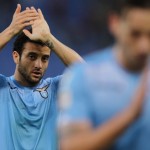 While Karlsen believes Anderson has many exciting skills that could help United’s attack, he feels the mooted fee of €35 million is excessive given the 22-year-old’s performances this season.

“Most comfortable playing on the left wing but nearly equally efficient on the opposite side, can even feature as a second strike.

“Obvious downsides: lack of consistency (fades in/out of matches, plays in bursts), not keen on defensive work, at times too selfish.

“Potentially exciting signing for Manchester United, but mentality and quick adaptation particularly important for such a ‘confidence player’.

“Adding a player (mid season) with this particular profile to a collective that is not working perfectly, seems a bit of a risk to me.

“The quoted price (£35m) also seems rather excessive given the fact that he hasn’t enjoyed a particularly brilliant season with Lazio.”