It has been reported that QPR coach Glenn Hoddle has warned Manchester United against signing Borussia Dortmund defender Mats Hummels. 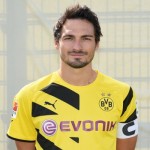 Hoddle wrote in the Mail on Sunday: “I see now there are reports they plan to spend another £100 million in the transfer market. If they are to, then you would imagine that Van Gaal’s first priority would be to solidify the defence.

“Mats Hummels has been mentioned but for me he is ball-playing centre-half. I really like him, but I’m not sure that he is the player United really need.

“For me, they require a stopper in the mould of Nemanja Vidic; someone whose first priority is to defend. Atletico Madrid’s Diego Godin, another name mentioned, is more suited to that role.”