It has been reported that Bayern Munich chief Karl-Heinz Rummenigge is adamant they won’t lose Thomas Muller this season. 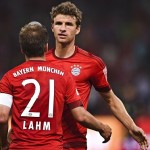 The German international striker was a major target for Manchester United this summer and has also been linked with PSG and Real Madrid.

“This door remains closed, I can promise everyone,” he declared.

Muller has kicked off the season with Bayern and Germany in superb goalscoring form.