Reports are out claiming that Manchester United are watching Anderlecht pair Youri Tielemans and Leander Dendoncker. 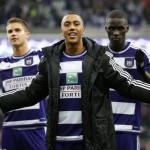 DHNet says representatives from the Old Trafford giants were in attendance for the 1-1 draw to watch Anderlecht duo Tielemans and Dendoncker.

Tielemans is rated at £24m and is under contract until 2020.

United have joined the hunt for him and are also interested in defensive midfielder Dendoncker, the reports claim.

Youri Tielemans is also on the radar of Arsenal.