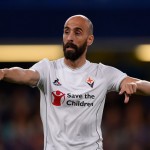 Reports are out claiming that Fiorentina midfielder Borja Valero is interesting Manchester United.

Blick says United have been tracking Valero this season and scouts were posted to see him action against Basel in the Europe League last week.

Valero, 30, is a veteran midfielder who has Premier League experience with West Brom, but has flourished during his time in Italy.

The midfielder has also been linked with a return to Spain, where former club Real Madrid have been mentioned as a destination.