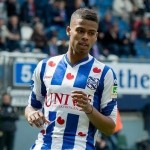 It has been reported that Heerenveen defender Jeremiah St Juste is attracting Premier League interest.

The Daily Star Sunday reported that Manchester United are tracking one of the best young defenders in Holland – Heerenveen’s St Juste.

The centre-back, 18, has already established himself as a regular in the Eredivisie.

Known as Jerry, the defender is a Dutch Under 19 international and Louis van Gaal has told his scouts to monitor St Juste’s progress and that of other youngsters in his native Holland. Tomasz Kuszczak Wants To Prove His Worth At Manchester United