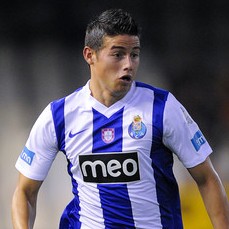 Manchester United had a presence in the stands for Porto’s clash with SC Braga on the weekend.