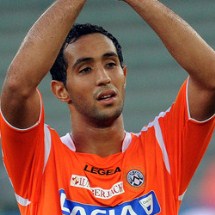 It has been revealed that Manchester United are interested in Udinese defender Mehdi Benatia.

The talented Frenchman can play at centre-half and as a defensive midfielder.

Gazzetta dello Sport revealed that Benatia was watched by United scouts in action against Napoli this week.

Benatia attracted tentative enquiries from Arsenal at the end of last season.

United boss Sir Alex Ferguson is now eyeing Benatia to add some steel to his midfield.