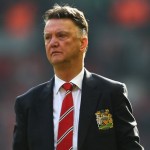 Reports are out claiming that Vitoria Guimaraes midfielder Bernard Mensah is being watched by Manchester United.

A Bola reported that the 20 year-old has been scouted extensively by United this season, with a bid for the youngster now being prepared ahead of the summer market.

United had a scout posted to make another check on Mensah on the weekend against Estoril.

Ghanaian Mensah was brought to Europe by Vitoria in 2013 after playing for the Feyenoord Ghana academy for two years.