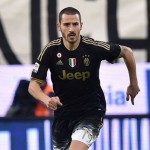 Gazzetta dello Sport claims that the Italian defender has helped spearhead Juventus’ remarkable turn in form, which has seen them top Serie A despite a disastrous start to the season.

United are believed to be ready to offer the asking price of around £40million to secure his services, as Louis van Gaal looks to strengthen up his defence.

It is believed that Bonucci, 28, is not wanted to be sold by Juve.