Reports are out claiming that Manchester United are weighing up a January raid on Newcastle United for Ayoze Perez. 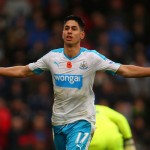 The Evening Chronicle reported that the Newcastle star has caught the attention of Louis van Gaal.

The 22-year-old has scored three goals in his last six Premier League appearances, including the winner in Newcastle’s 1-0 victory over Bournemouth on Saturday.

Tottenham and Liverpool are also reportedly interested in the Spaniard.