Reports are out claiming that Chelsea boss Jose Mourinho feels he could still become Manchester United manager in the future, it has been revealed. 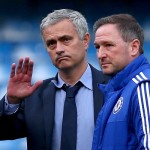 Le 10 Sport claims that Mourinho could end up at Old Trafford with the Portuguese boss very interested in testing himself in Manchester.

He was in the running to take over from Sir Alex Ferguson when he retired in 2013 but decided to return to his former club instead.

United’s owners are not completely convinced by Louis van Gaal’s methods and could make a move for the former Real Madrid and Porto boss.

Chelsea face a tough trip to Stoke in the Premier League this evening with Mourinho serving a stadium ban.

United host West Brom looking to close the gap on Manchester City and Arsenal at the top of the table.