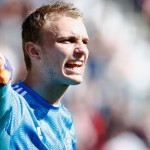 It has been reported that Manchester United are pondering a summer move for Ajax goalkeeper Jasper Cillessen.

The Red Devils are putting together a list of players to pursue at the end of the season for if David De Gea happens to leave for Real Madrid.

The likes of Petr Cech (Chelsea), Samir Handanovic (Inter Milan) and Hugo Lloris (Tottenham) have all been linked with United and now Holland international Cillessen has emerged on the hit-list.

United boss Louis van Gaal knows 26-year old Cillessen, who has 21 international caps, very well from his time at the helm of the Oranje but the Dutchman would still cost around £25million.