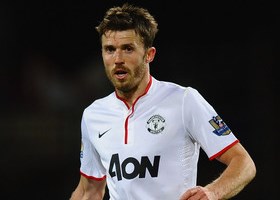 The Serbian centre back said an emotional farewell to Old Trafford after last night’s win over Hull City and Carrick says the United skipper has been immense for the club.

“You want to win the game but, at the same time, you’ve got to celebrate Vida,” Carrick told MUTV. “We have to celebrate the service he’s given the club for so long, having achieved so much.

“He’s a leader and one of the best defenders the club has had. It’s sad that he’s leaving because he’ll be missed as he’s a top player and an important part of the squad. Sometimes you’ve got to move on and we respect that.

“I’m sure he must have been touched by the reception he got from the crowd. He’s a man of few words so I was a bit surprised to see him get on the microphone at the end.

“You could see he was touched and there was definitely some emotion there. He’s got one game left but that was his last one at this special place. He’ll be missed.”