It has been reported that England legend Terry Butcher feels Manchester United will regret selling Danny Welbeck to Arsenal. 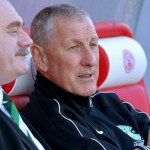 The 23 year old struck twice for England on Monday in victory at Euro qualifying opponents Switzerland.

“He’s got blistering pace, is a good team player and finishes very well.

“The way Arsenal play, and the chances they’ll give him, will make Man United regret their decision.

“He’s enjoying his football at the moment. Arsene Wenger must be purring because it is a superb piece of business.”