Manchester United winger Angel di Maria has admitted that a move to PSG in the future could happen. 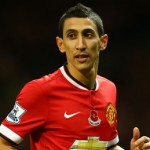 “Now I am in England, but you never know, there is a lot of movement in football. You can never predict where someone will play,” he told Telefoot.

“It would have been a good experience for me to go to Paris. I know that I am still young, maybe one day I will go to PSG.