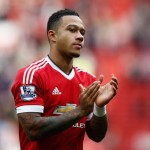 “Kitbag recently released the ranking of top-selling shirts from July to September and we think the results are worth sharing,” Depay said.

“Memphis Depay is a new entrant and was the third-highest selling shirt in the world after Messi and Ronaldo. Three out of the top-10 selling shirts are Manchester United players including Bastian Schweinsteiger and Wayne Rooney.”