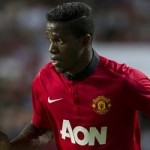 It has been revealed that Manchester United winger Wilfried Zaha is expected to win an England recall today.

The Daily Mail claims that the 20 year old’s sparkling pre-season form will be rewarded on Thursday with a place in the senior England squad.

Roy Hodgson will name squads for England’s double-header with Scotland — the Under 21s at Bramall Lane on Tuesday and the senior side the following night at Wembley.

The Manchester United winger, who signed from Crystal Palace for £15million last January, has been in impressive form over the summer.