Reports are out claiming that Manchester United are close to wrapping up the signing of Bayern Munich midfielder Toni Kroos. 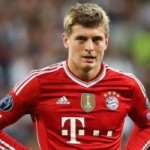 The Manchester Evening News reported that United were last night on the verge of sealing a deal to sign the German international.

The Premier League giants are understood to have agreed in principle to a £20m swoop for the German midfield star who is about to enter the last year of his Bayern contract.

Former Old Trafford boss David Moyes had made Kroos one of his main transfer targets before being sacked.

And now new United boss Louis van Gaal is understood to have given the go ahead for the deal to be completed.

Van Gaal knows all about Kroos having managed him when he was in charge at Bayern.