According to reports from Sky Sports, Manchester United are yet to submit a formal offer for Wolfsburg striker Kevin De Bruyne. 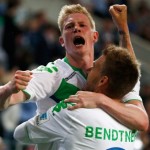 It is understood United’s crosstown rivals Manchester City are in the box seat to sign De Bruyne, with Wolfsburg believed to have accepted City’s £50million bid.

However, reports have surfaced the Red Devils are set to try and hijack the move, with manager Louis van Gaal said to be a fan of the Belgian international.

While United are yet to make an approach for De Bruyne, it is understood Van Gaal has identified the 24-year-old as a potential target as he looks to bolster his squad’s attacking options.